THIS YEAR THE Birmingham Comics Festival invites you to join in a series of anniversary celebrations and meet some of the amazingly talented and ground breaking comic book creators responsible for such works, alongside those who keep their original creative spirit alive and in print to this day.

35 years ago V for Vendetta debuted within the pages of Warrior magazine. This dystopian tale of a Guy Fawkes masked anarchist thwarting the will of a fascist government captured the zeitgeist of the times; seeping into the consciousness of popular culture and remaining so to this day. Subsequently collected as a graphic novel V for Vendetta also became a major Hollywood movie.

David Lloyd established his career illustrating traditional British annuals in the late 70s, contributing to House of Hammer,  TV Comic and assorted Marvel UK comics such as  Dr Who and The Hulk – wherein he co-created V’s partial inspiration Night Raven, a definitive collection of which has been published for the very first time this year.

While scholarly respectful of the traditional comic strip medium’s strengths, Lloyd’s published work is evidence that he continuously stretches himself to be creatively expressive and inventive with each new venture. That his sombre use of light and dark to magnificent chiaroscuro effect has long since made him a master of its application should by now be frankly superfluous, but then there are new comic fans born every day.

30 year ago DC Comics would revise their traditional horror anthologies with the release of the experimental prestige format series Wasteland and David Lloyd was among its original core group of artists. His work has graced several horror, dark fantasy and science fiction comic book series during his career, notably Aliens, Hellblazer, The Territory and Taboo. He has been involved in psychic thriller like Espers and rebooted classic spy adventurers such as James Bond; he is also the creator of the acclaimed crime thriller graphic novel Kickback, while Dark Matter collects his short stories and has been published internationally, as are many of his major works.

5 years ago, David Lloyd chose a new role. This time, the former Chairman of the Society of Strip Illustration, revered comic book artist and sometime writer became a publisher, establishing Aces Weekly – An anthology for the modern world, available exclusively as a digital sequential experience. Featuring many established international creators it has become a multi-award winning venture in but a short time. 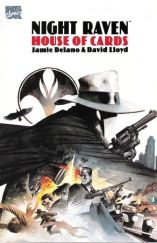 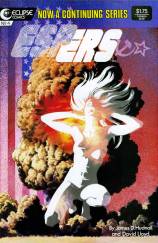 You can meet with and celebrate David Lloyd’s many successes at The Birmingham Comics Festival this June – Second city, first choice, don’t take substitutes!

THE BIRMINGHAM COMICS Festival is tickled pink that one of the great cartoonists of our time, Hunt Emerson, has played such a large part in helping making the festival such a success since it began in 2015 and is looking forward to celebrating some extra special events with him this year. 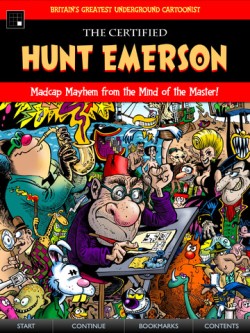 2017 marks the 30th anniversary of the publication of the You Are Maggie Thatcher – A Dole Playing Game written by Pat Mills, and illustrated by Emerson; an innovative satire on the politics of the times that resonates to this day. It is also 30 years ago since his first solo collection of work Calculus Cat – Death To Television, with subsequent expanded editions still published by Knockabout. It is also amazingly 15 years since he began working for The Beano… Showing time really does fly when you’re having fun!

From his early days on the British underground comix scene where the whirling dervish anthropomorphic humour of his artwork can only be likened to a be-bopping busy bumblebee, to today where his work is affirmed in its clarity as panel sequences dance with the reassured rhythm; he is a master of irresistibly amusing work. 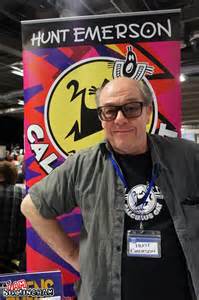 Hunt Emerson’s work has been published in some 30 comic books and albums, and translated into at least 10 languages worldwide. From The Big Book of Everything through to Firkin the Cat, onto his evergreen adaptations such as The Rime of the Ancient Mariner and Lady’s Chatterley’s Lover, and a recent digital collection of his complete works, each are evidence of his talent and that his work continues to hold universal appeal.

FROM WONDER WOMAN to Ant-Man, through to his most recent work on Lawless: Welcome To Bedrock, collecting the popular Judge Dredd Megazine series, the devil may be in the detail but let’s not under forget the sequential storytelling skills of Phil Winslade who will be attending this year’s Birmingham Comics Festival events.

Be it the future worlds of Heavy Metal and 2000AD, the excitement of Daredevil and Spider-Man swinging across skyscrapers or Batman emerging from the shadows, Winslade encapsulates city life in all its naked rawness just as he portrays humanity’s ugliness and beauty in equal measures: from celebrating morality’s optimism in classically heroic proportions on books such as The Flash and Aquaman through to reinterpreting such richly diverse characters as Jonah Hex and Howard The Duck for a modern readership.

Responsible for portraying positive female role models in the modern comics medium, co-developing and creating the likes of Wonder Woman: Amazonia, Goddess, Nevada, and Lawless for assorted publishers internationally, the worthiness of such ventures aside the actual work itself is well appraised, the results of which have resulted in Phil Winslade being nominated for several awards.

ACE CARTOONIST LEW Stringer, famed for his work in The Beano, Viz, Buster and Oink! will be at The Birmingham Comics Festival this June. 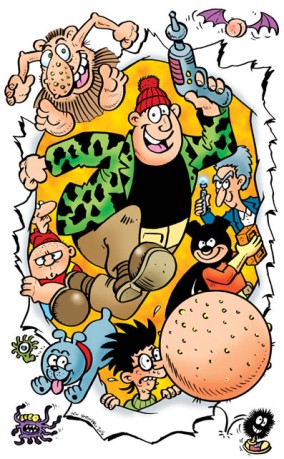 A master of the pun, his sense of timing allows comedic scenarios to be played out to their fullest; ensuring much slapstick cartooning alongside and a keen wit for sight-gags aplenty along the way, Lew Stringer continues to be among the nation’s finest comic strip humorists.

Not only has he contributed to some of Great Britain’s bestselling comics, magazines and the odd newspaper in his professional writing and drawing career, his sense of humour travels well abroad, with his own characters like Brickman and the Suburban Satanists syndicated in comics over in the USA and Scandinavia.

In keeping with the festival’s anniversary celebrations it was 30 years ago that Lew Stringer created one of his classic characters when Combat Colin  began appearing in Marvel Uk comics, then 5 years ago be brought Colin back to appear online at Ace Weekly, ten years ago that he started working for The Beano and 20 years ago that he broke in the international market when Suburban Satanists first appeared in Norway’s Geek comic.

Past achievements aside, British kids continue to delight in his work on a regularly basis when they pick up their copies of Toxic, Dr Who Magazine and The Beano at newsagents and supermarkets up and down the country!

Renowned these days for illustrating the adventures of everyone’s favourite Time Lord; from storyboarding the actual hit TV series and producing graphic novels for the BBC, to pencilling the flagship strip within Doctor Who Magazine, and contributing to the US comic book series published by IDW, Mike Collins was previously responsible for the artwork of another major British science fiction icon when illustrating the Judge Dredd comic strip for The Daily Star newspaper, and has also worked on books such as Babylon 5 and Star Trek comics in his time.

The artist’s versatility has never been confined by genres, having worked creatively on most of the major characters published by Marvel and DC Comics, including drawing such superhero heavyweights as Superman, Wonder Woman, Batman, The Flash, Spider-Man and The X-Men. His early contributions to 2000AD included pencilling Slaine, and he has illustrated other concepts from the worlds of fantasy and sword & sorcery including a number of TSR game licensed comics for DC during the 90s and at the start of the millennium the first ever Welsh language graphic novel Mabinogi, based on Celtic myths.

He would also illustrate an adaptation of Charles Dickens’ A Christmas Carol that was judged to be one of the top ten graphic novels of 2010 by The Sunday Times while in Norway he is renowned as the artist on the Varg Veum series of crime fiction graphic novels. Notwithstanding all these artistic achievements he has also written numerous comics and strips for Marvel, DC, 2000AD and other publishers.

Ron illustrated the Family Man saga for DC Comics’ Hellblazer title, and contributed several Future Shocks for the pages of 2000AD, but his work within the British comics industry stretches far wider than that, working on numerous classic weekly anthologies not least Look-In and Battle, diversifying from comedy to gritty action with consummate ease.

Well respected as a book illustrator, he has taught art and is renowned for the various books he himself has written on the subject, including Figure Drawing Without A Model, alongside contributing essays for such books as The Encyclopedia Of Science Fiction.

A member of the Cartoonists Club of Great Britain (CCGB) and the Professional Cartoonist Organisation (PCO) his humorous works have been published internationally, and as a quick-on-the-draw caricaturist you’ll also be able to see him draw live right in front of you at the convention.

The artist on two volumes of the Madam Samurai graphic novel, his work has appeared within  the pages of 2000AD, the Judge Dredd Megazine, Boom Studios’ Cthulhu Tales over in the USA, and across the worldwide web with his Paradise Mechanism series appearing in Aces Weekly.

David Hitchcock’s artwork is innovative in its approach yet traditional in an illustrative sense and he ably demonstrates these talents are not diametrically opposed when applied to the sequential medium.

DAVID LEACH WINNER of Channel Four’s Come Dine With Me show will be attending the Birmingham Comic Art Show on Saturday 24th June but juggling his other alter egos of Titan Comics editor, cartoonist and writer.

Titan keeps David busy by day editing an array of popular titles for all ages ranging from Kim Newman’s Anno Dracula to Wallace and Gromit, Lenore, Adventure Time and The Misadventures of Jane. However, let us not forget his own creative escapades that go back as far as appearing within the pages of Whizzer & Chips before creating Psycho Gran for Oink! a character he’s delighted fans by bringing back in recent years within the pages of anthologies and her own cantankerous collection. Meet David and find out more! 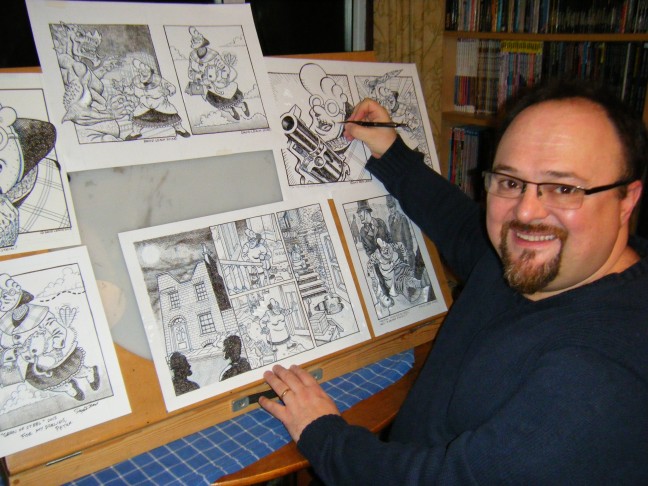 ROLAND BIRD will be a guest at this year’s Birmingham Comic Art Show, already having made appearances at both the WILD About Comics event and the MAC’s big screen screening of Flash Gordon.

His career continues to develop, from working as an art assistant on books for Marvel and DC Comics, to drawing the Heart of War graphic novel for Markosia, to pencilling Legion of Superheroes and now with a new series imminent for Aces Weekly.

Those looking to break into the industry can also look forward to the classroom talk he will be giving offering art tips and techniques.

Having penned and collaborated on stories for Marvel, Image Comics and Antarctic Press in the past, he’s more recently been responsible for scripting the Future Primitive graphic novel published by Markosia and the Planet of Daemons comic book series from Amigo Comics.

Since then he has written and published a wide portfolio of games – Squadron UK, Squadron: X, The Comics Code, The Code of the Space-Lanes, The Code of Steam and Steel, The Super Hack. He is also known for visiting and refereeing games at more RPG conventions than anyone else in the country and has published a convention guide based upon these visits, Conventional Thinking Volumes 1 and 2. 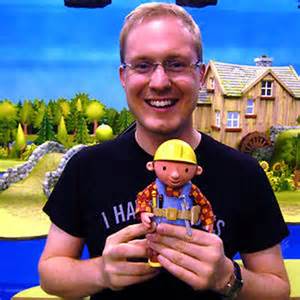 The voice of Aks Moe and Sil Unch in Star Wars, animation shows like Johnny Bravo, Scooby Doo and some of the leading digital games, he will be taking part in our panel shows and signing for fans.

NB: Guests appearances may change, due to work commitments or health reasons.