THE BIRMINGHAM COMICS Festival prides itself on its talk events, guest interviews and live stage debates. They have proved gregarious and passionate, with thoughtful, provoking, and insightful comments made by many of the participants. Above all, the festival strives to make them entertaining, so expect a lot of humour too!

In 2019 this will continue apace. With experienced journalists and broadcasters again involved, and not just on stage, but on air, film, via podcast and beyond as the festival explores new media; intent on expanding the comic medium – Both before and during the festival itself.

These panel talk shows and otherwise will take place at various events during The Birmingham Comics Festival in 2018.

Further details will follow, and for those interested in the festival’s previous noteworthy talk events we leave you with highlights of one each from 2015 and 2016…

During 2016’s Birmingham Comics Festival the MAC Birmingham held the Midlands cinematic premiere of the documentary film  Future Shock! The Story of 2000AD. The screening was followed by a panel discussion with 2000AD writer Ian Edginton and artists Ian Richardson and Phil Winslade, hosted by Paul H Birch. Transcribed excerpts can be found online at BleedingCool.com when you click here. 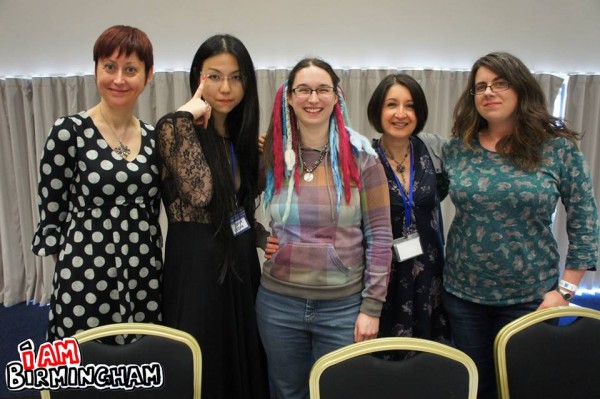 Controversy was courted during the convention held for the 2015’s Birmingham Comics Festival when Big Centre TV’s Julie Pickering hosted a panel featuring Katy Cardy , Laura Howell, Sonia Leong and Jessica Martin. A review of this debate can be found online at BleedingCool.com when you click here.
2015 Photo (c) I Am Birmingham.